One of the world's largest cargo ships sailed into Mombasa on Monday, signalling that the port's expansion was paying off.

Residents lined the Likoni ferry crossing to watch the massive MV MSC Portugal sail up the channel into Kilindini Harbour.

According to Kenya Ports Authority (KPA), the safe navigation into the channel by the ship carrying 6,000 twenty-foot containers indicated the port had finally become a world-class facility.

The vessel, with a length equivalent to three football fields, is the longest container ship to call at the port. 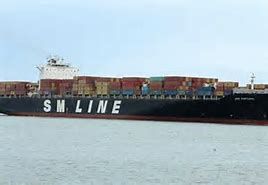 It was piloted into the harbour by the port's Operations General Manager William Ruto.

It carries 3,105 twenty-foot containers in its cargo space and another 3,550 on the deck.

"This vessel is not just an ordinary container ship owing to its size, she can only call at big ports like Reunion and Mauritius in the region, not smaller ones,” said Captain Ruto.

He spoke shortly after disembarking from the vessel he navigated in a record one-and-a-half hours from the entrance of the channel.

Visiting ships sailing up the Kilindini channel are usually navigated by local pilots to ensure maximum safety of the vessels and their cargo.

Flying the Liberian flag, the ship was expected to offload 1,000 containers and load a similar quantity.

Until the completion of a dredging project to minus-15 metres, the channel was restricted to vessels with a maximum depth of 11 metres.

The port is now capable of handling third and fourth generation vessels with capacities ranging between 4,500 and 6,000 twenty-foot containers.

Other large ships that have called at the port in the recent past include MV Ever Delight and Ital Mattina, with an overall length of 264 metres.

Meanwhile, nine container ships docked at the container terminals recording a ship average working time of 3.31 days in the week that ended on April 25.

Import containers declined by 4,647 while exports recorded a decline of 985.

During the week under review, the total container yard population recorded 19,013 twenty-foot containers.

Other transit countries are Tanzania that registered 379 TEUs, South Sudan with 213 TEUs, Democratic Republic of Congo with 169 TEUs, Rwanda with 146 TEUs, and Somalia and Burundi, which recorded 29 TEUs and 12 TEUs respectively.

The weekly performance at the conventional cargo terminal revealed that 14 general cargo ships docked and discharged 167,721 metric tonnes. A total of 26,849 metric tonnes were loaded for export.

A forecast for the next two weeks indicates that 21 general cargo vessels are expected to discharge 327,562 metric tonnes and load another 2,492 metric tonnes.

The container terminals are expected to received 13 ships to discharge 7,247 TEUs and load 7,095 TEUs.