Kenya’s first consignment of crude oil from Mombasa to Malaysia

Alpine Loyalty tanker transports Kenya’s first consignment of crude oil from Mombasa to Malaysia on August 26, 2019. President Uhuru Kenyatta pledged that the country’s oil windfall would be put to good use 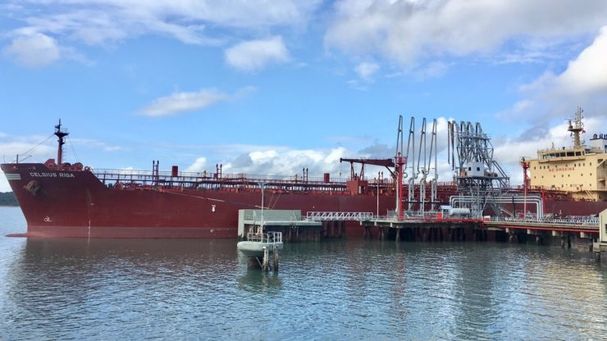 As the Alpine Loyalty (MV Celsius Riga) tanker docks at the Malaysian port of Dickson at 8pm on September 10 with Kenya’s first consignment of 200,000 barrels of crude oil, expectations back home will be that the Sh1.2 billion earned from the black gold will mark the beginning of a change in fortunes for the world’s newest exporter.

On Monday, President Uhuru Kenyatta, flagging off the Marshall Island-registered vessel, pledged that the country’s oil windfall would be put to good use.

“We will ensure that Kenya’s natural resources are utilised in a manner that yields maximum dividends today, but without compromising the interest of future generations,” the President said.

The tanker immediately set sail for Port Dickson to deliver the consignment to its Chinese buyer, ChemChina UK Ltd, the oil-trading arm of ChemChina (China National Chemical Corporation) Petrochemical, which is engaged in crude oil trading, storage and procurement for ChemChina’s refinery companies.

“This event marks a special history for us. While initial attempts were unsuccessful, Kenya’s potential for oil and gas had been established. I’m proud to say our grand march to oil and gas export has now begun and the flagging off of this consignment represents a new dawn not just for Kenya, but also for our region; and a beginning of a new era of prosperity for all Kenyans,” President Kenyatta said.

But even as the shipment made its way to Malaysia, leaders at the function were calling for equitable sharing of oil proceeds.

The oil had been stacked at the Kenya Petroleum Refineries Ltd's storage facilities in Changamwe, Mombasa, having been transported by road from Turkana County.

“We understand [that], right from Turkana to Mombasa, different people have contributed to ensure we make the first export today. And I ask for equitable sharing of resources according to our laws. We also have to reinvest the proceeds in infrastructure to improve lives of Kenyans,” said the President.

The President was reacting to governors Hassan Joho (Mombasa), John Lonyangapuo (West Pokot) and Salim Mvurya (Kwale) and Turkana Deputy Governor Peter Lotethiro, who called for the implementation of the Mining Act (2016) that outlines how resources accrued from minerals and petroleum should be shared.

Government will be able to influence pricing for imports, exports and insurance premiums through discounted rates