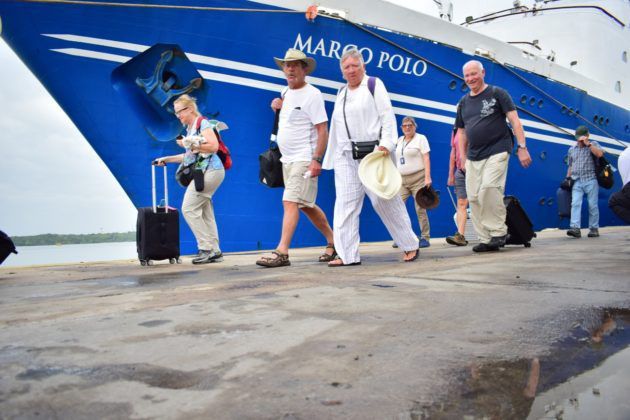 The ship, which had approximately 575 passengers and 346 crew members on board, was received by Kenya Ports Authority management early Thursday.

The luxurious passenger liner MS Marco Polo, which is on a 78-day trip around Africa and Europe, docked at the newly refurbished Sh350 million state-of-the-art Cruise Ship Terminal.

The tourists on the 55 year old vessel will spend a night in Mombasa before heading to Seychelles on Friday. The ship came from South Africa, docked at Zanzibar before coming to Kenya.

Speaking after receiving the vessel, KPA Managing Director Daniel Manduku said the Authority has put measures in place to ensure that all passengers and crew members arriving at the port are screened.

“Before any passenger disembarks, there is rigorous screening. Mombasa Port has already issued a circular to all shipping lines concerning this matter,” said Manduku.

The ship, which had approximately 575 passengers and 346 crew members on board,
was received by Kenya Ports Authority management early Thursday/CFM

Earlier, the KPA issued a circular to all shipping lines docking at Mombasa to screen all its passengers and crew against Corona Virus, which has so far claimed more than a thousand lives.

As of Wednesday night, another 97 people died in China, raising the national toll to 1,113, with more than 44,600 people now infected, according to AFP.

The circular, Manduku said, contains guidelines on how to handled suspected cases of Corona virus.

“We’ve issued a guideline on how to screen and treat suspected cases of the disease in line with health regulations. Once we suspect you might have been infected, we have facilities to quarantine you and refer you for further tests,” he said.

Manduku said Kenya has so far been lucky as no incident of the deadly virus has been reported at the port of Mombasa.

A New Multi-Million Industrial Park To Fill The Gap